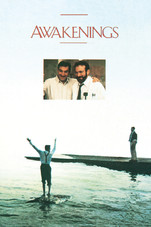 Based on the Oliver Sacks celebrated book, Awakenings (1990) is an account of postencephalitic parkinsonism and the effects of levodopa. Otherwise, film accounts of PD seem few, despite its prevalence.

By opening one man's eyes to the world... he opened his own. Robert De Niro (in an Oscar®-nominated performance) and Robin Williams star in this powerful, true story of a maverick doctor and the patients whose lives he changes. Williams plays Dr. Malcolm Sayer, a shy research physician who uses an experimental drug to "awaken" the catatonic victims of a rare disease. De Niro co-stars as Leonard, the first patient to receive the controversial treatment. His awakening, filled with awe and enthusiasm, proves a rebirth for Sayer too, as the exuberant patient reveals life's simple but unutterably sweet pleasures to the introverted doctor. Encouraged by Leonard's stunning recovery, Sayer administers the drug to the other patients. The story of their friendship during this emotional journey is a testament to both the tenderness of the human heart and the strength of the human soul.

There are no reviews yet.

Be the first to review “Awakenings (Parkinsonism)” Cancel reply